Connecting the Bassin de la Villette to the Seine, the Canal Saint Martin offers a unique location for the Marin D’Eau Douce’s boats.

When exploring the Canal Saint Martin, enjoy the charms of navigation on the canal opened in 1825. It was designed to bring drinking water to Paris. From the Bassin de la Villette to the Port de l’Arsenal, you will go through eight locks and two swing bridges down to the mouth of the Seine (not accessible).

The river cruise is punctuated by the iconic sights of Paris: the 25 degrès Est, the Point Ephemere, the Hotel du Nord, the Place de la République, the Colonne de Juillet and the Saint Martin vault.

This navigation will be at the speed of the canal and it is the slowest offered by Marin D’Eau Douce. However, thrill-seekers are not forgotten because the journey includes several locks, swing bridges and the Saint Martin vault… You may come across other boats, such as Canauxrama or Paris Canal in the locks…thrills guaranteed!

Its special atmosphere, mysterious underground vaults and the unhindered poetry of this waterway lined with chestnut and plane trees and punctuated by romantic bridges, makes the Canal Saint-Martin a highlight of Parisian tourism. (Group itineraries on request only)

The canal is 4.5 km long, more than 2 km of which is underground. It connects the Bassin de la Villette to the Seine upstream with a drop of twenty-five metres. Opened in 1825, the Canal Saint-Martin has nine locks and two swing bridges. It is open to navigation 363 days a year.

Commercial traffic has declined significantly, giving way to high tourist activity. Part of the major area that is the Canal Saint-Martin, is a unique but fragile heritage which must be maintained. The technical services of the City of Paris have, therefore, recently carried out major maintenance, repair and modernisation work.

The construction of the Canal Saint Martin began in 1805 from its two ends, but it was not completed until 1825 due to the difficulty of fitting such a structure into an already highly urbanised city. The oldest parts are located under the bridge of Boulevard Morland, the vaults of the Bastille and Rue La Fayette. Nine locks punctuate the canal.

New industrial districts of Paris were born along the Canal Saint Martin. Under the Second Empire, prefet Haussmann wanted to create the Boulevard de Prince-Eugène (Boulevard Voltaire) and came up against the presence of the canal, which would have required a lifting bridge, an unacceptable thing for a grand highway intended to receive heavy traffic. The engineer Belgrand solved the problem by moving it two kilometres upstream to the locks of the Bastille. It was rebuilt at Rue du Faubourg du Temple. 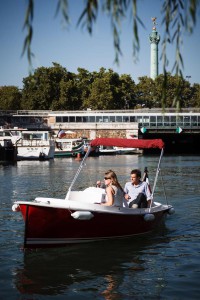 This made it possible to reduce the canal between the Bastille and Rue du Faubourg du Temple by about five metres and thus to build a fixed bridge to cross the new boulevard.

The deepening of the channel created a trench and removed all ports. Prefet Haussmann therefore decided to complete the works by directing the canal through an arch between the Bastille and the Avenue de la République, creating the Boulevard Richard- Lenoir. The whole operation was carried out between 1860 and 1862.

In 1906, the work to cover the Canal Saint-Martin restarted. A new vault, Le Temple, was built as an extension to the Richard –Lenoir vault. Thus was born the Boulevard Jules Ferry.

There are famous bridges which date from the second half of the nineteenth century.

The surroundings of the canal, on the other hand, have undergone profound changes since its creation. 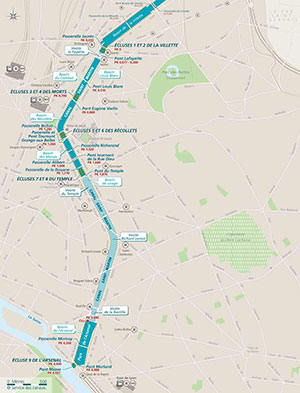 Itinerary on the canal Saint-Martin