By going to or from our base after your trip on our licence free electric boats, you will have the opportunity to discover or rediscover this mythical district of Lille.

Articulated around the famous “Grand Place”, now “Place du General De Gaule”, and its column of the Goddess erected in 1845, the historic centre of Lille is the nerve centre of the city. With its Flemish architecture made of its famous red bricks, its buildings, some of which date back to the 17th century, its many shops and monuments, this district is full of activities to discover.

Abandoned until the 1970s, when a vast operation to restore its buildings was undertaken, it is now being renovated and is highly prized by an increasingly young population.

The monuments of the “Vieux Lille” will amaze you with their typically Flemish architecture such as the “Vieille Bourse de Lille, located a few steps from the “Grand’ Place”. The “Vieille Bourse de Lille” is certainly one of the most beautiful monuments in the city. Built in the 17th century when Lille was still Spanish for the city’s merchants, the “Vieille Bourse” was classified as a historical monument in 1921. It is an integral part of life in Lille. Its inner courtyard is a place to meet and trade with its booksellers and florists.

The charm of the “Vieux Lille” also lies in its cobbled streets, which are among the oldest in the city.
The “Vieux Lille” is also known for its mouth shops, how not to mention the famous Méert pastry shop and its vanilla waffles or the famous “estaminets” (kind of tavern with local and traditional specialities). True institutions in the north, these establishments, which once sold beer, tobacco and games, are still in vogue today in a modern but authentic style.

The “Grand’ Place” is also a Mecca of Lille culture with the presence of the “Théâtre du Nord”. Former military office built in 1717, its facade is classified as a historical monument. Before becoming an essential cultural centre, the Théâtre du Nord has known several lives. First a military office, it then housed the Saint-Nicolas Covered Market for nearly a century, and finally became the Roger Salengro Hall named after the former mayor of Lille until 1986 when Pierre Mauroy (city mayor at this time) launched the theatre project. 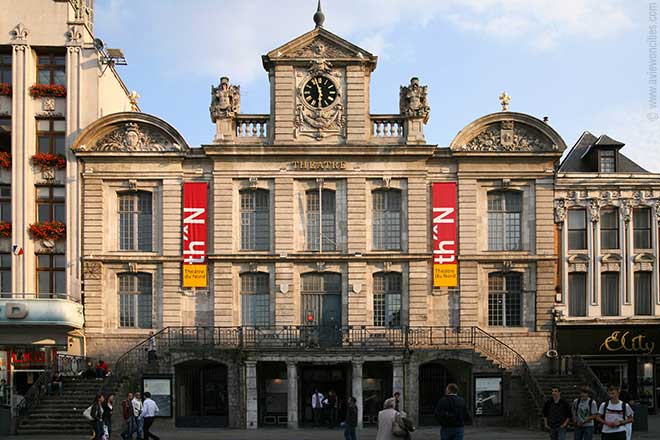 Also located in the “Grand’ Place” is the headquarters of the famous newspaper “La Voix du Nord” founded in 1941, rue Saint Nicolas, which will surprise you with its unusual architecture.

Marin d’Eau Douce invites you to discover our base where you can rent our electric and licence free boats, avenue Mathias Delobel next to the Parc de la Citadelle and only 10 minutes walk from the “Vieux Lille”.